© 2019 The Resus Room
In Partnership with - SJTREM

When a patient presents following a polytrauma with a multitude of possible pathologies we look to rapidly identify and correct them. In the case of a patient with hypotension or respiratory distress the question of whether or not to decompress the chest prior to definitive imaging (CT) can be tricky. It depends amongst other things on the time frame required to get the imaging, the physiological state the patient is in and the risk vs benefit of instrumenting the chest based purely upon clinical findings in the resus room (which is notoriously difficult in that environment and in these patients).

Point of care ultrasound has evolved into part of the initial assessment trauma. The hope is that quick scan can give us rapid additional information that may be of use prior to CT, especially in those in whom the risk vs benefit of immediate interventions are finely balanced.

Before I go on, what chance of a pneumothorax would you be happy to accept in order to make the decision to decompress a chest and in what patient cohort?

Now have a read of the pubmed abstract below… 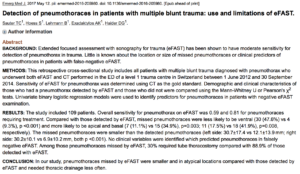 Detection of pneumothoraces in patients with multiple blunt trauma: use and limitations of eFAST.. Sauter TC. Emerg Med J. 2017

It would be easy to read this, see the sensitivity of 0.59 for lung ultrasound (during eFAST) and wonder why a radiological test with a near 50:50 chance of picking up the abnormality of note, a pneumothorax, was worth performing. Looking at social media when this paper was recently published, that was in parts what happened. But don’t stop there, lets have a look at the paper (also make sure you have a listen to the superb podcast from Casey Parker at Broomedocs on the same matter)…….

This was a retrospective single centre study of all patients admitted to a level 1 trauma centre on Switzerland from 2012-2014 with blunt trauma, who underwent both eFAST and also a chest CT.

A great recap of eFAST can be found here on the superb 5minsono website, but essentially it’s a rapid assessment via ultrasound of the abdomen, pelvis, heart and lungs and was intended in this study to take less than 2 minutes. Notably the lungs were scanned at 2 points on the longitudinal parasternal view. These ultrasound scans were all being compared to as the gold standard test of a CT that was interpreted by board certified radiologist..

The main aim for the authors was to identify associations between those pneumothoraces that were missed with their characteristics identified on CT (so things such as the location, size and whether or not these pneumothoraces ended up requiring intervention).

So what did they find?

Well of the 106 patients who had both eFAST and CT in this time frame 59% were identified on the ultrasound. Of the pneumothoarces that were missed, these were most commonly found in the apex or basally and were on average just over 12mm.

But what about the clinical question we posed earlier, what does this mean for the unstable patient coming into Resus that we’re concerned that either their respiratory distress or shock may be due to a pneumothorax (amongst other possibilities) and we’re trying to decide whether to decompress the chest prior to CT? Well it’s hugely important to appreciate that the patients that ended up having thoracostomies in a time critical fashion prior to CT were excluded, completely understandable, but this needs to be noted when interpreting the paper. As always when interpreting a paper, identifying the patient group included is key to translating the paper into practice.

Finally it’s worth thinking about the sensitivity for eFAST at identifying those pneumothoarces that require any intervention at all in the ED that had the time to make it to CT, and this was 0.81. Much more like it! Previous studies quoted by the authors are more consistent with this value Diagnostic Accuracy of Chest Ultrasonography versus ChestRadiography for Identification of Pneumothorax: A Systematic Review and Meta-Analysis. Ebrahimi A. Tanaffos. 2014 showing; ‘The analysis showed the pooled sensitivity and specificity of CUS were 0.87 (95% CI: 0.81-0.92; I2= 88.89, P<0.001) and 0.99 (95% CI: 0.98-0.99; I2= 86.46, P<0.001), respectively.’ And Pleural ultrasonography versus chest radiography for the diagnosis of pneumothorax: review of the literature and meta-analysis. Alrajab S. Crit Care. 2013 showing; ‘Ultrasonography had a pooled sensitivity of 78.6% (95% CI, 68.1 to 98.1) and a specificity of 98.4% (95% CI, 97.3 to 99.5).’

So what does this all mean for us?

Firstly, although it can be tempting to a to grab a headline from an abstract and spread the message on social media, when we see this we need to delve into the fine print in the article itself and the great work done by the authors (and in the same manner don’t just accept my take on the paper but go and have a look at it yourself!).

This paper doesn’t change the fact that when we’re evaluating trauma patients rapidly prior to CT, eFAST does pick up the majority of pneumothoraces. Although a small retrospective study it does add that the pneumothoraces that eFAST picks up tend to be large, and they tend to be the ones in which we will end up draining. It also reminds us that a negative ultrasound of the chest (especially one looking at limited points of the lung) may well miss pneumothoraces and being aware of this is key, especially if these patients deteriorate, so don’t take complete reassurance from a normal ultrasound scan.

In the case of the poly trauma patient in whom the risk/benefit of thoracostomy prior to CT is debatable, then eFAST or chest ultrasound may be useful in this situation.

Most importantly it doesn’t change the fact that if you have a critically unwell patient with a high suspicion of a pneumothorax that requires intervention rapidly to prevent deterioration or arrest, then this needs to be acted on immediately and without the need for imaging.

The paper is a great read and a useful reminder to think through decision making and use of radiology in the sick trauma patients, make sure you go and have a look yourself and listen to Casey’s podcast!

Great post on this at BroomeDocs; eFAST for Pneumothorax